More about the voice...

My voice hurts, what do I do?

If you are having voice problems, then you are probably feeling very distressed. No one around quite understands the problems you are facing - after all you are not ill, are you? A very common scenario is that you have been to the doctor and been offered antibiotics and told to drink lemon and honey. If you are ill, these can work, but if you are experiencing vocal difficulties the reality is that few general practitioners know how to support you.

Above all, do not panic. There are people out there to help. You should seek help as quickly as possible, as difficulties rarely resolve themselves unless something is changed.

Posture is important - the founder of Alexander Technique was an actor who suffered vocal problems and set about developing his technique to get over them.

Osteopathy can help - there is a London based osteopath called Jacob Lieberman who has made a speciality of working with the voice.

Some of the best support is from speech therapists, though getting to see one can seem tortuous. These are highly skilled professionals who work within the medical profession to give support to anybody who has vocal difficulties. Young children are often helped by speech therapy. Actors who have strained their voices, and singers too. If you are a teacher with a voice problem, try and get to see one as soon as possible.

How do you get to see a speech therapist?

Respected Speech Therapists have a code of conduct that says all patients should first be seen by an Ear, Nose and Throat (ENT) consultant. The usual way is to get a GP referral to see an ENT consultant within a voice clinic. It is better to try and get to one in such a clinic, because ENT surgeons cover a wide range of specialities. Also a clinic will often have a speech therapist as a member of the team. Failing that, most ENT consultants would give a referral.

When visiting a GP it is important to be resolute in asking for help. Show the GP you know the route you need to take.

If you use your voice for professional purposes you should be aware of some factors which affect your professional performance. Here is a checklist...

As voice user some of this is inevitable, but if you are doing most of these things, then you are using your voice excessively and need to factor in some vocal rest time. Numbers 4 and 5 are warning signs which will increase without relevant action. Number 9 is surprisingly an incorrect way to deal with vocal loss!

Janet is not a qualified medical practitioner. If you have a serious vocal pathology you MUST find out by visiting an ENT clinic as quickly as possible. That said she can help you cope with your professional needs in the meantime - by helping you find strategies to put in place in you work. If you are a teacher there are techniques of classroom management that can be put in place immediately.

If you are given the all-clear by an ENT clinic then Talking Voice is a good place to start rebuilding confidence in your voice.

How does the voice work?...

Voice and speech are the consequence of a complex interplay between physical structure, conditioning and emotional stimuli. We can simplify these into five subsystems. 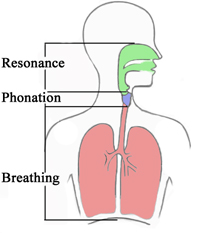 In speech, the brain uses the vocal mechanism in a series of conditioned responses to create communication. When the need for a particular response (the motivation) is established the brain then sends controlled signals to the muscles throughout the body to coordinate the behaviour of all its parts and create the desired sounds.

To create vibrations, the larynx needs air to flow upwards through the vocal folds (or vocal cords - situated behind the "Adam's Apple".) The folds open wide to allow the breath to be drawn down the trachea (windpipe) by an expansion of the lungs - which elastically expand to fill the space created when the rib cage expands and the diaphragm pushes down. To create the reverse flow of air, the rib cage releases and the diaphragm is pushed back up by the abdominal muscles and the pressure in the trachea (sub-glottal pressure) increases. The folds, at the top of the trachea, are drawn close to each other by what physicist call the Bernoulli Effect. As air flows past the constriction caused by the folds it has to speed up. As it speeds up, its pressure drops, drawing the folds in. The folds close, causing the sub-glottal pressure to rise, and they are pushed apart again. Nature has designed the folds to enter freely into a series of rapid vibrations which appear as a wave motion along their length. In a male voice they typically come together one hundred times every second, in a female voice about two hundred.

In this way a rapid change of pressure is created just above the larynx. This is the source of sound (a pressure wave) which travels through the Upper Vocal Tract. Here it can resonate (loosely "echo"). Most musical instruments are designed to resonate and create a desirable timbre (tone). By the action of resonance, in the vocal tract, certain frequencies of the sound are enhanced and others suppressed. The vocal tract is remarkable in that it can modify its shape and create a range of timbres - the different vowel sounds. The lower jaw, tongue, lips and palate can all move, controlling the shape of the resonators, and also closing them off creating articulation in the form of consonants.

The brain provides the control. It sends continually changing impulses to the muscles operating the vocal folds to adjust their tension and alter the frequency at which they vibrate. In this way the pitch is controlled.

The brain also responds to feedback collected by many means. Sensory nerves collect information from sensors throughout the body. The ears report what the sound is like. Stretch detectors in the muscles report on how the breathing muscles are behaving and sensory detectors in the head give a response to the physical feeling of the vibrations within the vocal tract.

One does not need to think about these actions for them to happen. Breathing is an automatic behaviour, which happens from birth. Others are conditioned behaviours, learned during childhood. However, all these can be consciously controlled, and conditioned reflexes can be modified. How they are controlled and allowed to respond is the skill of the owner of the voice - and of course the techniques that can be acquired through voice and speech training.